Canada issued a set of Five self adhesive stamps with No Value Indicator ( Value at the time of issue was 0.90 Canadian dollar) . A Miniature Sheet with five stamps and a booklet containing 10 stamps were issued. All stamps are odd shaped in the shape of Dessert. The Print run was 200,000.

The theme of issue was Sweet Canada – Desserts

Nainamo Bar    – A dessert of Canadian origin named after the City of Nainamo , British Columbia. It consists of three layers a wafer, a nut, a coconut crumb base , custard icing in the centre and chocolate ganache on top. It requires no baking.

Blueberry Grunt – Blue berries are boiled in sugar & lemon juice till they turn soft, Dumplings are made of flour and steamed with blueberries till they turn firm. The noise made gives it the name grunt. Served with maple cream toppings. 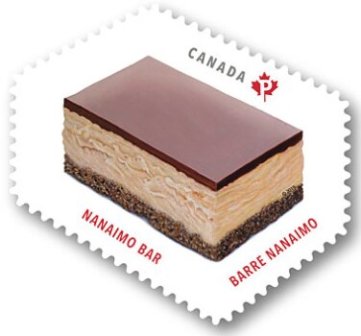 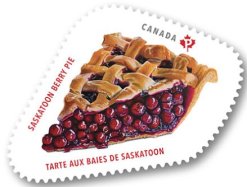