The Cuisine featured on stamps are

190 won – Dasik – It is a bite size hangwa normally accompanied by tea. It is made by kneading grain or other seed flour with honey and then pressing them into decorative mould called dasikan. Also called Tea Cookies. 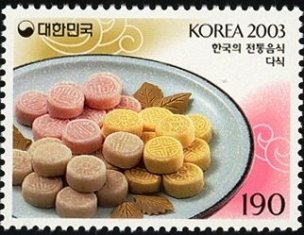