Australia issued a set of four stamps on Vintage Jam Labels on 06 Mar 2018. All stamps are $1 denomination. Four Booklets were also issued each containing 10 Stamps. Labels featured are

$1 – Kingurli    – In South Australia , George McEwin (1815-1885), a gardener and orchardist founded a jam factory with his son in Houghton in 1862. The main aim was to to use excess fruit at the orchards. At one time they employed almost 100 persons. The Jam was marketed under the brand names such as Glen Ewin, Viking, Kingurli. It was well known for its plum Jam. Prince Englebert is a large purple plum.The factory closed in 1988 as business declined but the orchard is still being used for fruit growing.

$1 -Alva  – Apart from large players , many small jam manufacturers existed around main food producing states of Australia. Alva was a well advertised Jam label in 1940s, 50s and 60s in Australia. It was established by W H Johnson Pvt Ltd in Melbourne in 1933 but was taken over in 1970s. The stamp features a Dark Plum Jam Tin.

$1 -Peacock’s Jam – George Peacock established a Jam factory in Hobart in 1861 -first commercial production in Tasmania. He later shifted the factory to Hobart waterfront and then  expanded to Sydney, Melbourne, Brisbane and New Zealand. Upon Peacock’s retirement it was taken over by Henry Jones IXL “I excel in everything I do”. Stamp features Apricot Jam tin.

$1- Melray -Preserving Companies, grocery chains and co-operatives sold jams under own brand names. Melray founded in 1932 at Melbourne was one such company. It was forerunner of Food land chain of 1958. It was most likely that Melray Jams was produced by Henry Jones at South Yarra in Melbourne which was home to Jam Production for 100 years . 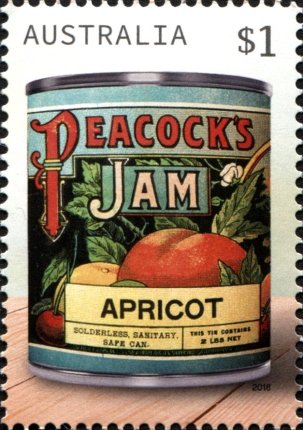 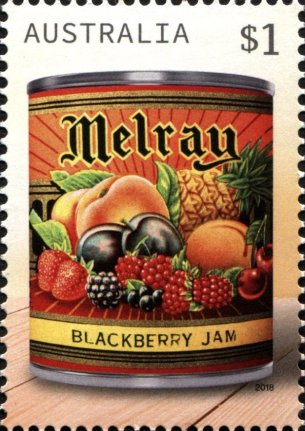