Brazil issued stamps on Coffee during 1938-53 keeping in line with its coffee market share. 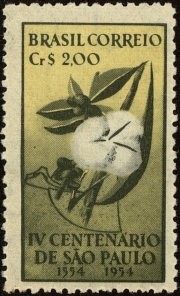